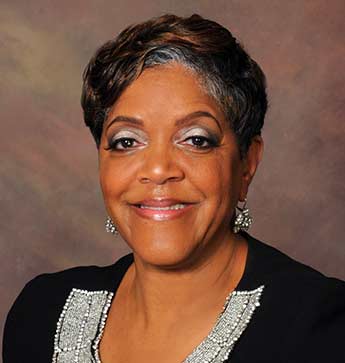 ...a Vessel of Honor who has been separated and set apart to do a good work for the Lord.

Lady Carolyn Waddell is a chosen vessel who ministers with exhilaration, excitement and clarity. Her method of preaching the gospel seemingly brings the bible to life and she strives on stepping out of herself to allow God to take control.

Lady Waddell was born in the small town of Winnsboro, SC and had big goals to become successful and prosperous in life. However her ambitions were greater than what her hometown could offer. Therefore, after graduating from Benedict College with a B.S. Degree in Business Administration, she relocated to Columbia, SC to accept a position as a claims representative with Allstate Insurance Company. Lady Waddell became content with her job, her surroundings and friends and felt that this was the place to build her life's dreams; but she would soon be confronted with a life altering decision that would place her on the path to her destiny and purpose in life.

After two years with Allstate, she was offered a promotion that would require relocation to another city. She refused their offer twice, but on their third request, she decided to pray and she received an answer from God to move to Spartanburg, SC.

Lady Waddell still had her own goals and aspirations in mind, but God would eventually reveal her true purpose in life. During this new transition, she eventually met and married Bishop Jimmy Waddell, the senior pastor and founder of The Harvest House Ministries. They are blessed with three children, Christian, Janessa and Jocelyn.

Lady Waddell remained employed in the Insurance industry for 16 years, eventually receiving a promotion to supervisor until accepting her appointment as a Summary Court Judge serving Spartanburg County.

Finally in October, 2000, while serving the second term of her appointment, she heard a prophetic word from God to leave her secular job and work fulltime in the Ministry. Lady Waddell was ordained and licensed as a minister to preach the gospel on May 5, 2002.

Lady Waddell knows without uncertainty that she is now following the path that God has ordained for her. She ardently supports her husband, her friend, her Pastor, Bishop Waddell as the Co-Pastor and church administrator utilizing her gift of governing. She is also the director of the Kingmaker's Women's Ministry.

Lady Waddell feels her greatest call is ministering to the needs of women and educating them concerning God's true purpose for their existence on this earth.

Lady Waddell is available for conferences, workshops, special events or church service. If you would like to engage Lady Waddell, contact: Sis. Nancy Waddell at 864-595-7377
or email at harhouse@bellsouth.net